OTTAWA, Ontario, Oct. 22, 2020 /PRNewswire/ — In 1945, 51 nations, including Canada, signed a treaty to establish a new world body with four fundamental goals: to save succeeding generations from the scourge of war; champion human rights; foster respect for international law and treaties; and promote social progress. Seventy-five years later, the creation of the United Nations is being remembered on the Royal Canadian Mint’s very first coloured one-dollar circulation coin.  The signature UN blue and the red of our iconic maple leaf on this coin create an unforgettable tribute to Canada’s enduring commitment to international cooperation through the United Nations. This ground-breaking circulation coin was unveiled today on the Mint’s YouTube channel. 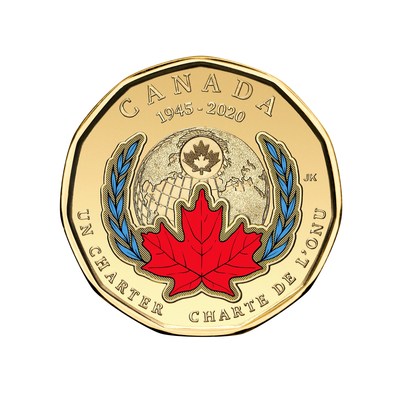 “Seventy-five years ago, Canada was one of the original signatories to the Charter that created the United Nations and we are proud of our leadership within this institution to make our world more just and peaceful,” said the Honourable Karina Gould, Minister of International Development. “As the Mint’s special $1 coin circulates from coast-to-coast-to-coast, the Government of Canada hopes it will stand as a symbol of the continuing importance of the United Nations, and of our nation’s enduring belief in international cooperation.”

“The Mint is proud to celebrate Canada’s history, culture and values through coins that find millions of Canadians and we are pleased to share the important story of Canada’s role in founding the United Nations 75 years ago,” said Marie Lemay, the Mint’s President and CEO.  “We are honoured and excited to shine a bright light on a moment when founding members of the United Nations chose to move forward with a promise of international cooperation, peace and security by colouring a one-dollar circulation coin for the very first time.”

The reverse of the one-dollar circulation coin commemorating the 75th anniversary of Canada’s signing of the United Nations Charter is designed by Westport, Ontario artist Joel Kimmel.  In a nod to the UN logo, a world map within an olive branch wreath is paired with a maple leaf to symbolize Canada’s commitment to the UN and its values.  This central design is framed by a “1945-2020” double date and the words “UN CHARTER” and “CHARTE DE L’ONU” along the edge.

Two million coloured coins, with a red maple leaf and olive branches in the same shade of blue as the United Nations flag, are entering circulation today.  There is also an uncoloured version limited to one million coins.  The obverse features the effigy of Her Majesty Queen Elizabeth II, designed by Canadian artist Susanna Blunt in 2003.

This collectible may be ordered as of today by contacting the Mint at 1-800-267-1871 in Canada, 1-800-268-6468 in the US, or online at www.mint.ca/victory.They are also available at the Royal Canadian Mint’s Winnipeg boutique, as well as through the Mint’s global network of dealers and distributors, including participating Canada Post outlets.

About the Royal Canadian Mint
The Royal Canadian Mint is the Crown corporation responsible for the minting and distribution of Canada’s circulation coins. The Mint is one of the largest and most versatile mints in the world, offering a wide range of specialized, high quality coinage products and related services on an international scale. For more information on the Mint, its products and services, visit www.mint.ca.  Follow the Mint on Twitter, Facebook and Instagram.

Images of the circulation coin and collector product are available here.